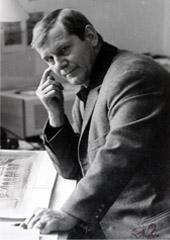 How it all began…
My father and the company’s founder Hans Minarik was born in today’s Czech Republic and enjoyed many years of success as a stage designer.

Right from the beginning, our studios were always located in Munich’s beautiful Schwabing district.

From successful stage designer to interior designer
It all began in the 50s, when a stage design my father had done attracted the attention of the famous porcelain company Rosenthal. They were so impressed with his work that Rosenthal commissioned him to design their showroom in Selb. The mark my father left on Rosenthal can still be seen today.

The Rosenthal project was the starting shot to his career as a highly demanded interior designer. Numerous commissions followed, starting with the expansion and remodeling of everything from shops, hotels and restaurants, to private homes and apartments.

The second generation
In 1962, I, Sebastian Minarik, was born in Munich. After school, I decided to pursue an apprenticeship as a carpenter having inherited my father’s aptitude as a craftsman and his creativity. In my three years of apprenticeship, four years as a journeyman and during my worldwide installation work, I learned something that no university program could have taught mepractice!

After successfully completing my training, I began working with my father in 1987. For four years, we worked side by side, until he passed the studio’s management on to me in 1991.

The self-learner
With the support of our family business’ many years of tradition, I auto-didactically acquired the skills needed to turn myself into today’s internationally successful interior designer for private homes and apartments. My craftsmanship knowledge continues to be more than helpful today – in fact, it’s become my distinguishing characteristic!

The customer is king
I focus on customers with their wishes and dreams. I support them in turning those wishes and dreams into reality – with creativity and individuality. Nothing I do comes pre-made. I research all of the details on room design myself and implement them with the utmost care. From handrails to materials, cords, tassels and flounces, the so-called trimmings.

Success domestically and internationally
Over the past 20 years, I have successfully expanded or remodeled numerous private houses and apartments all over Germany and Europe, such as Austria, Switzerland, Portugal and Italy. International projects require two qualities which I have acquired during this time: organizational talent and intercultural competence.